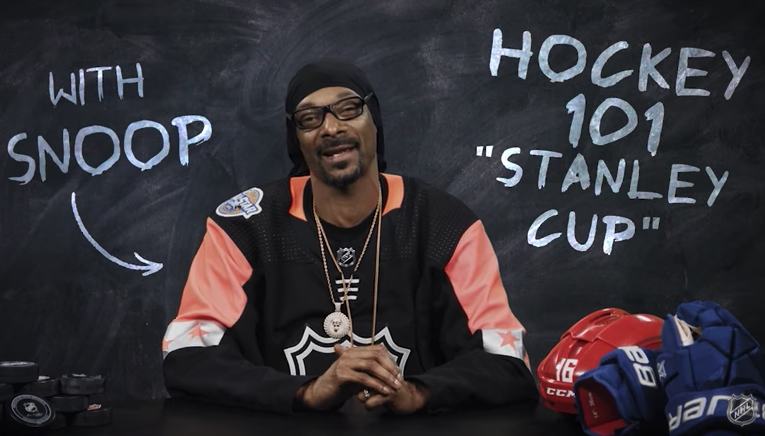 While admittedly my team is competing more for a high draft pick than the playoffs, it is again one of those great times for all hockey fans.   While an extremely diverse sport in terms of the countries that players come from, from a multicultural marketing standpoint in the U.S., well it is predominantly white.  However, depending on the market, there has been a significant increase in fans from diverse backgrounds (ex. Hispanic, Asian in California markets) but yet in cities such as Detroit with large African American populations, the fans (at the game) are not representative of the area and predominantly white.  Now comes a unique perspective from the famous artist Snoop Dogg who partnering with the NHL has worked on some interesting videos as DOGG Cherry.

Ok,  not close at all.  NHL viewership is 92% caucasian so this is stating the obvious, but the NBA wins hands down.  However at least one famous fan Snoop Dogg has worked with the NHL to create a nice Hockey 101 intro for everyone, however will likely relate with African American fans as well as all Snoop Dogg fans of any race.

There is no doubt that in the hockey world Don Cherry is the most famous, however, for the NHL increasing the appeal among multicultural fan bases is incredibly important and maybe, Dogg Cherry can help.

African American history in the NHL.

While Jackie Robinson is famed to have broken the color barrier in baseball, it is less well known who has that distinction in hockey.  Willie O’Ree in 1958 has that distinction.  In addition he was the first director of the NHL Diversity task force and while the league is not know for the significant presence of black players, there have been many through the years.  For a little more, check out the trailer for a movie “Soul On Ice” focused on just that.